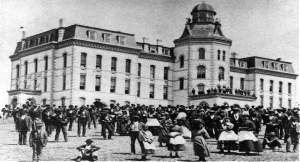 On February 1, 1865, on the same day that Congress passed the 13th Amendment to the Constitution ending slavery, Dr. John S. Rock, Esquire, became the first person of African American descent to be admitted to the Bar of the United States Supreme Court.  Seven years later, on January 4, 1872, a young Mobile attorney, Moses Moore, became the first African American to be admitted to practice before the Alabama Supreme Court.

Moses Wenslydale Moore was born on February 15, 1841 in Demerara, British Guiana, (now the country of Guyana) making him a free-born subject of the United Kingdom.  He came to the United States aboard the ship Koomar on October 19, 1867, landing in the Port of New York.  According to the passenger list, Moore, who listed his profession as a school teacher, boarded the ship in London.

Four years later, in 1871, Moore was among the first law school graduates from Howard University and was admitted to the Bar of the District of Columbia.  From there, he went to Mobile, Alabama, where he applied to the Bar.  During this time period, admission to the bar was means of an examination by a judge of a candidate’s legal knowledge.  In November 1871, Moore presented himself before Circuit Judge John Elliott for such an examination.  Judge Elliott asked retired Alabama Supreme Court Justice Lyman Gibbons to examine Moore.  According to a reporter for the Mobile Daily Register,

“Moses Wenslydale Moore, a Negro as black as the ace of spades…presented himself for examination, stating that he had been admitted to the bar in the District of Columbia.  The court requested Judge Gibbons to examine him, and examination was conducted in open court.  A great deal of interest was manifested on the part of the bar…from the fact of the appellant’s color.  He passed a very satisfactory examination, and an order was made by the Court admitting him to the bar.  This is the first negro ever admitted to the bar in Mobile.”

Four months later, Moore, at the time a resident of Selma, applied for admission to the Bar of the Alabama Supreme Court, a request which was granted and recorded as follows in the Supreme Court minutes:

“Comes into open Court Patrick Ragland, Esq. an attorney of this Court and makes application that Moses W. Moore of the County of Dallas be admitted to the bar as an attorney of this Court and it appearing to the satisfaction of the court that said applicant is of lawful age of good moral character and that he has been licensed to practice law in the Supreme Court of the District of Columbia, it is therefore considered by the Court that said Moses W. Moore be licensed as an attorney at law and solicitor in Chancery in all the Courts of law and equity in this state upon taking the oath prescribed by law and said oath was then duly administered.”

Patrick Ragland, who sponsored Moore before the court, was in 1872, serving as the Marshal and Librarian of the Alabama Supreme Court. Seven years after his admission, on June 11, 1879, Moore, now residing in Lowndes County, Mississippi, applied for a passport with the intention of traveling abroad.  Whether he returned to British Guiana or possible to Great Britain is a mystery. Moses W. Moore is the first African American admitted to practice before the Alabama Supreme Court.