ALABAMA’S FIRST BLACK JUDGE
ONE OF THE FIRST 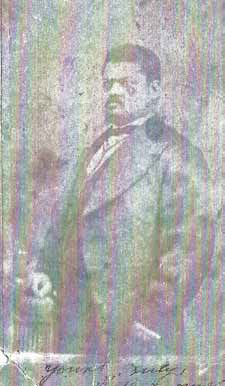 Roderick  B.  Thomas  was  born  as  a  free  black  person  in  Knoxville, Tennessee, on December 26, 1848,  and would Eventually move to Selma (Dallas County), Alabama. He holds quite a resume, as he was elected Clerk of the Dallas County Criminal Court in 1869, and to the Selma City Council in 1873. (Frederick Douglass  wrote about Thomas’ superior intellect and steadfastness in his service on the City Council in Douglass’ newspaper, The North Star).

In 1874, Thomas was elected judge of the Dallas County Criminal Court (thus becoming the first Black judge in Alabama). Thomas’ Court was held in what is now known as the Vaughan-Smitherman Museum.  The local Dallas County lawyers asked him to step down from the position in which he had been duly elected because, among other reasons, they did not want white women to have a black man sit in judgment of them. In such time, blacks tied their political fortunes to the party of Lincoln, the “Radical Republicans”. Conversely, the Democrat Party was the dominant force in the State of Alabama and the party to which the powerful white ruling class in Selma belonged. In 1874, once they regained electoral power, the local white Dallas County lawyers worked with Legislators for this area to essentially evict Judge Thomas by abolishing the Dallas County Criminal Court. He apparently only had the opportunity  to  serve  as  judge  for  one  month. About  one  year  later,  the Alabama  Legislature  created  the Municipal Court of Selma with the same jurisdiction as Thomas’ former judgeship and placed a white in the position.

Thomas was quite a political figure since he succeeded in garnering strong black voter turnouts during election time. Therefore, once the local white power structure regained control of local politics, he was charged with voter fraud and faced criminal prosecution. In a twist of irony, he enrolled the assistance and representation of a former Confederate Col., John Reid, who was an attorney who likely recognized that the prosecution of Thomas for voter fraud was both racially and politically motivated. Thomas prevailed in his voter fraud charges after a protracted legal battle, but it was a challenging time of his life.

Shortly  thereafter,  he  married  a  local  schoolteacher  and  left  the  state.  He  is  said  to  have  formed  a  law partnership with Mifflin W. Gibbs in Arkansas in 1885. Roderick Thomas died on November 16, 1887. Upon his death, the Little Rock Bar (both white and black lawyers) passed a resolution commending “the high qualities which distinguished him as a man, and of the ability and untarnished integrity so conspicuous in all that pertained to his profession.” Gibbs, then a judge of the chancery court, T.J. Oliphant and F.T. Vaughan drafted the resolution, which was placed in the record of all Arkansas courts.

The Little Rock Arkansas Bar has honored this great man more than 124 years ago, it is time we do the same.