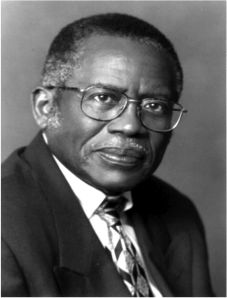 Fred Gray was born in the Washington Park section of Montgomery on December 14, 1930, to Abraham and Nancy Jones Gray. Although he intended to become a history teacher and preacher, a faculty mentor at Alabama State pressed Gray to enter law school. After gaining entrance to Cleveland’s Western Reserve University Law School (now Case Western Reserve University), Gray privately pledged to return to Montgomery and fight the city’s segregation laws. At the age of 23, Gray came back to Montgomery, ready to keep that pledge.

After Rosa Parks refused to relinquish her bus seat on December 1, 1955, the young Gray, who shared lunch with Parks earlier that day, became her attorney. Despite Gray’s efforts, Parks was convicted of disorderly conduct and violating a civil ordinance. During the famous bus boycott that followed, Gray served as a legal advisor to the Montgomery Improvement Association, and he was lead counsel in Browder v. Gayle, the 1956 case in which the Supreme Court upheld lower court decisions prohibiting segregation on city buses.

The bus boycott launched Gray’s career, as other civil rights activists and organizations sought his services. After state attorney general John Patterson effectively outlawed the National Association for the Advancement of Colored People (NAACP) from Alabama in 1956, Gray provided legal counsel to the organization until it was again permitted to operate in the state eight years later. When state officials charged Martin Luther King Jr. with tax evasion in 1960, Gray was a member of the defense team that won an acquittal from the all-white jury.

Gray litigated cases that went before the Supreme Court. In the 1960 case Gomillion v. Lightfoot, Gray convinced the high court that a 1957 act of the Alabama legislature was unconstitutional. The Supreme Court’s ruling in Gomillion derailed other efforts throughout the country to dilute African American votes through racial gerrymandering.

Perhaps Gray’s most significant contribution to the state was his pursuit of school integration. Gray helped represent Vivian Malone and James Hood in their efforts to attend the University of Alabama, leading to Gov. George Wallace’s “stand in the schoolhouse door,” and he was also the plaintiff’s attorney in Franklyn v. Auburn, which desegregated Auburn University. On January 28, 1963, Gray filed Lee v. Macon County Board of Education, and as a result of this case, the court issued an order in 1967 that integrated all of Alabama’s educational institutions that were not already under court orders. Lawsuits filed by Gray eventually desegregated all public colleges and universities in the state of Alabama, as well as more than 100 local school systems.