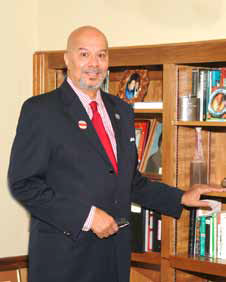 A. “Jay” Cooper was born May 30, 1944 in Mobile, Alabama. After attending elementary school in Mobile, he entered Marmion Military Acad- emy in Aurora, Illinois. He then followed his two brothers to the University of Notre Dame, where he was selected to go to Washington as a par- ticipant in the Department of State’s Foreign Affairs Scholars Program. After graduating with a Bachelor of Arts degree In Latin American History, he entered law school at New York University. Mr. Cooper was a Summer Associate at the New York law firm of Strasser, Spiegelburg, Freid & Frank. While in law school, he founded the Black American Law Students Association, which is now known as the National Black Law Students Association (NBLS) and is over Forty-Four years old with chapters on every law school campus in America.   Mr. Cooper was also one of the 17 founders, and a member of, the Board of the National Conference of Black Lawyers (NCBL).

Subsequently, he was asked by the Kennedy family to go to Tennessee to work on the reelection campaign of Senator Albert Gore, Sr. Mr. Coo- per’s Tennessee campaign work ultimately landed him a job on Capitol Hill. While working on Albert Gore, Sr..’s senatorial campaign, he formed a friendship with Harold Ford, Sr. the future Congressman from Memphis and subsequently was Chief of Staff to Congressman Ford for five years.

Mr. Cooper was a successful litigator in Alabama and a leading civil rights attorney. He was one of the founders and first president of the Alabama Black Lawyers Association, Inc., Its successor, the Alabama Lawyers Association, Inc., is the National Bar Association’s Alabama affiliate. In 1972 Mr. Cooper was successful in his bid to become the Mayor of Prichard, Alabama, a city of some 45,000 people becoming the first black in Alabama to ever defeat a white incumbent. Mayor Cooper was a founder, and the first President of the National Conference of Black Mayors (“NCBM”) which now has over 800 members. He also served as General Counsel to the NCBM.

After serving two terms as Mayor, Mr. Cooper was asked to join Secretary Moon Landrieu in the Secretary’s office at the Department of Housing and Urban Development After HUD, be went to Capitol Hill, first as Executive Director of the Congressional Black Caucus Foundation, then as a member of the professional staff of the Ways and Means Committee and then Chief of Staff and Tax Counsel to Congressman Harold Ford, Sr.

As a Ways and Means professional staffer, he was intensely involved in the creation of the Tax Reform Act of 1986, especially in the area of non-profit organizations. Mr. Cooper worked closely on the provisions for hospitals and educational institutions, as well as for Memphis-based businesses and corporations.  In  the  100th  Congress,  he  continued  to  monitor  tax-exempt  regulations  and  lobbying  regulations  throughout  the  budget reconciliation process. In 1988, Mr. Cooper left the Hill to become a Shareholder in Ginsburg, Feldman and Bress, Chartered. His specialties include litigation, legislative and administrative law, as well as tax policy and public finance. Mr. Cooper is a member of the bars of Alabama and the District of Columbia.

Mr. Cooper is from an accomplished family of Alabamians. His parents were Gladys Catherine Mouton Cooper and Algernon Johnson Cooper, Sr., both graduates of Hampton University. Cooper’s father ran the family-owned Christian Burial Insurance Company and the Christian Benevolent Funeral Home in Mobile. His family includes: an older brother, Gary, a Notre Dame graduate, who is a former Assistant Secretary of the Air Force, a two-star General in the Marine Corps, and former U.S. Ambassador to Jamaica. Another brother, Mario, a Georgetown Law Center graduate, was Deputy Director of the Democratic National Committee and Manager of the 1992 Democratic National Convention in New York City.  A sister, Peggy, a George Washington University School of Law graduate and a founder of The Duke Ellington School of the Arts in the District of Columbia, served as the elected President of the District of Columbia Board of Education. Peggy is an arts patron and a major fund-raiser for both charitable causes and Democratic candidates.   Jay’s youngest sister, Dominic, has the most important, rewarding and difficult job; she teaches kindergarden students. Mr. Cooper’s professional, social, political and familial associations bring a powerful national network of relationships to problem solving.